by ssorllih
For myself I make meat patties in my hands and by eye for size. But for a church shindy I am going to make breakfast sandwiches with sausage patties, eggs and pancakes. So for this effort I want as much uniformity as I can achieve.

PVC pipe and its fittings come in even inch sizes with generally 1/4 in wall thickness. So 3 inch pipe will yield rings 3 inches inside diameter when sawn into very short lengths. The couplings with get 31/2 inch rings and 4 inch pipe and coupling will be that much larger.

Since the volume of a cylinder increases as to the square of the diameter it follows that a 1/4 inch patty made in a 31/2 inch ring will be 36% bigger than a patty made the same thickness in a 3 inch ring. The weight of the patty increase linearly with the thickness.
A 31/2 inch patty 3/16 thick weighs 1.5 ounces.

I just lay a piece of wax paper on the ring put down a lump of sausage, another piece of paper and roll it full and tight with a rolling pin. The patty comes out wrapped in wax paper.
by NorCal Kid
Ross, when I make burgers or sausage patties, I found these little items to be quite handy.
I've seen them referred to as 'english muffin rings' (cheap at amazon). The nice part about them is they're the perfect diameter for use with breakfast sandwiches. I line them with plastic wrap & am able to crank out a consistent batch of meat patties fairly quickly. 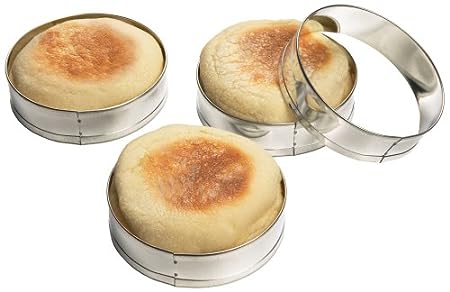 by ssorllih
Thanks Kevin. I will look into those. I need some for english muffins.
by el Ducko
Hey, Ross, please share your English muffin recipe with us. I've tried and tried to duplicate Bays' English muffins. (...much prefer their texture to the Thomas kind.) Bays look like they have been allowed to rise, versus Thomas which looks like a batter bread. ...got any ideas?

Yeah, I use those muffin rings too, Kevin. ...paid too much for 'em at a restaurant supply company down the street. (Boy, do they have some neat toys in there, though!)

by ssorllih
I am still working on english muffins. Haven't gotten them right yet.
by el Ducko

ssorllih wrote:I am still working on english muffins. Haven't gotten them right yet.

That makes two of us.
They sure are good, though, fresh off the griddle. ...worth the pursuit.

by ssorllih
I have time this week to try a couple of recipes that I have in mind.
by el Ducko
I tried to do a little internet research recently on English muffins. Don't know if this will help. How's your recipe compare? ...would be interested to see it.
Russ

● 10 oz water
● 1 Tbsp shortening
This looks more like a biscuit recipe. Not tried. Instead, use Julia Child's recipe:

Place buttered rings on a medium griddle or 325 deg. electric skillet. Sprinkle in a little coarse corn meal. Pour 1/2 full. Cook until slightly dried on top (6 - 10 min.), then turn over and cook another 6 - 10 minutes (un-mold when possible).

Alton Brown attributes invention of the English muffin to Samuel Bath Thomas (1855-1919) who manufactured them in Chelsea (New York City) beginning in the late 1870`s. The brand is now owned by Bimbo Bakeries, USA, (Mexican conglomerate.) We think Thomas` texture too grainy, and prefer the bubbly texture of the Bays brand. George W. Bay started the company in 1933 in Chicago using his grandmother`s recipe (which includes potato flour). The company is family-owned (2010).

Julia Child says the recipe is based on those of English colonists who were trying to make scones or muffins like in England using orally-transmitted ingredient lists and methods, and cites a book on old English baking recipes, "English Bread and Yeast Cookery" by Elizabeth David, Penguin Books, 1979. Wikipedia says muffins date back to the 10th century in England, were quite fashionable by the 18th, and are still popular there. ..and don`t forget the old traditional song, "Do You Know the Muffin Man." Sought after since Victorian times, their popularity peaked just prior to WW-I.

Rings are hard to find. Julia Child recommended cat food cans. Nowadays, the sides and bottom of cans are pressed from one piece of metal, so the bottom can`t be cut out without mangling it. I use 4" hamburger rings obtained by special order from a restaurant supply house.
====================================================
● Having grown up with Bay`s muffins, I prefer their almost French-bread-like hole structure. East coast people seem to favor the Thomas style with a more grainy "nooks and crannies" texture.
● To increase the number of holes, add 1 tsp baking soda or use self-rising flour. The holes are small, and go all the way through like pancake or other batter cake holes.
by ssorllih
The Alton Brown recipe is 83% hydration and the Child's recipe is 92%. 83% will slump and is very hard to handle dough and 92% will be just pourable.
I am going to try the higher hydration with an overnight ferment at room temperature.
I just checked and I have 15 inches of 3 inch aluminum pipe that I can saw into 3/4 inch long sections. So muffin rins won't be a problem. Maybe I will cut some shorter for beef patty rings.
by Baconologist
The following version of Alton Brown's recipe has produced the best English muffins for me, and I have tried a lot of recipes. Varying the baking soda will increase or decrease the "nooks and crannies."

http://shesimmers.com/2009/03/homemade- ... nnies.html
by ssorllih
This looks like a very good recipe and certainly a good starting point. This is a high hydration dough about 110% liquid to flour/milk ratio. Also the first I have seen that suggest covers for the rings, helps to trap the heat. This I will try before I start experimenting.
Thanks.
by el Ducko
I still like the idea of letting the yeast do the work (2nd rise, then scooping the dough gently into rings), versus doing it all with baking soda. But then, the Alton Brown and SheSimmers recipes are aiming at the Thomas "nooks and crannies" texture instead of the Bays French-bread-like texture.

The higher hydration should make the dough easier to handle after the 2nd rise. Good idea, Ross. I'll try that.

Either recipe, though, ought to be great. It's hard to lose when you're talkin' fresh, hot off the griddle English muffins.

by ssorllih
I mixed flour salt, yeast and watered milk per the English muffin recipe Leela's modification. I allowed a twelve hour ferment then added the fat and the soda and baked them this morning on a griddle. I used a high domed pot lid in place of a cookie sheet. The taste and texture is good. I like the appearance.

The yellowish cast is from the used chicken fat that I used.
by el Ducko
Looks good. I'll be right over! (I wish.)

by ssorllih
I makes an acceptable muffin. In 3 inch rings the dose was two tablespoons of very sloppy wet batter/dough 6 minutes per side. goint to have to try different release coatings on aluminum rings. Bacon fat was only marginally satisfactory. maybe grease and flour as with a cake pan.
All times are UTC+01:00
Page 1 of 2
Powered by phpBB® Forum Software © phpBB Limited
https://www.phpbb.com/