A couple weeks ago I made some Kabanosy and after seeing varying textures of the finished product on Google images I asked the question as to whether or not the sausage should have a smooth finish or be crinkly or more rough. The general consensus is it should be rough. Not to pick on BobK, but Bob made the statement how he didn't see how you could smoke them and they not finish with a rougher texture due to the shrinkage. However, what Bob didn't take in consideration was the depths of my incompetency because mine finished smooth.

Of course, Bob was correct, and had I followed the proper procedure I would have ended up finishing the sausages at a much higher temperature (190F/90C) however I was also smoking some other things and I had to compromise and use a lower heat which resulted in a very flavorful but smooth skinned Kabanosy which was far from being shelf stable.

Since one of the things that interests me considerably about this craft is the ability to prepare shelf stable meats. Maybe its just me but to me this is cool business so I thought I'd conduct an experiment for the heck of it.

Since the temperature in the shop has been around 60F with humidity in the 70's I simply hung a sausage in the kitchen and put the rest in the cooler where temperature is in the low 40's and humidity is 77% and let them sit a week.

Here is a picture. The Kabanosy on the left is the one's that were in the cooler and that on the right has been just hanging in the shop.

If you look close you can see the sweat of the fats coming through the sausage on the right where the other one has little if any noticeable oil on the skin.

I don't know if this will be useful to anyone but it is interesting to me and I've concluded that if you are aiming for a shelf stable Kabanosy you'd be better served finishing the sausages at the high end of the temperature range as this should speed the drying. I also wonder if I had cured the meat in the fridge for two or three days if the natural bacteria wouldn't have done some work on the sausages and lowered pH to 5.3. Had it done this and had I finished the sausages at a higher temp I feel the sausages would have been shelf stable as shortly after they came out of the smokehouse. But then again, just hanging them in the kitchen seemed to work by itself.

I think I'll experiment some more only maybe next time I'll go 100% old school and monitor the pH as I go.

As for the angel tears, my Italian friend gave that term to me and the jury is out on that but it does seem to be a good sign.

I'd appreciate any thoughts on this.
Top

Butterbean, This is indeed very interesting information. I was thinking about the same thing: how to make kabanosy a little dryer and shelf stable. I will be impatiently waiting for other forum members input on this....
Top

I only made them once. They were not something I would try again. Just not for me but from the pictures I found coming out of the smoker they were a little bit wrinkled and I hung them downstairs after smoking for a week. From what I remember the looked close to yours. 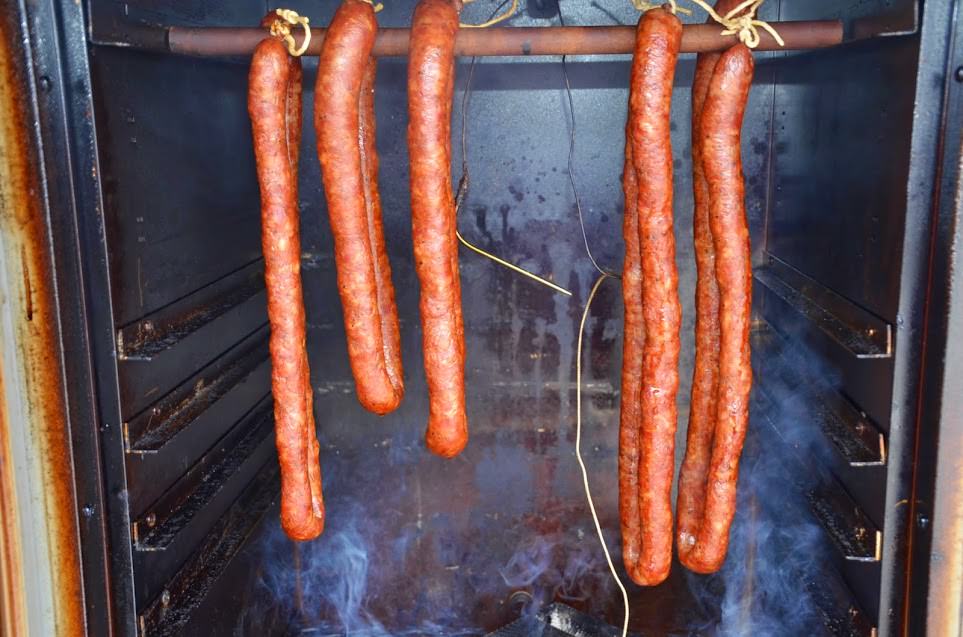 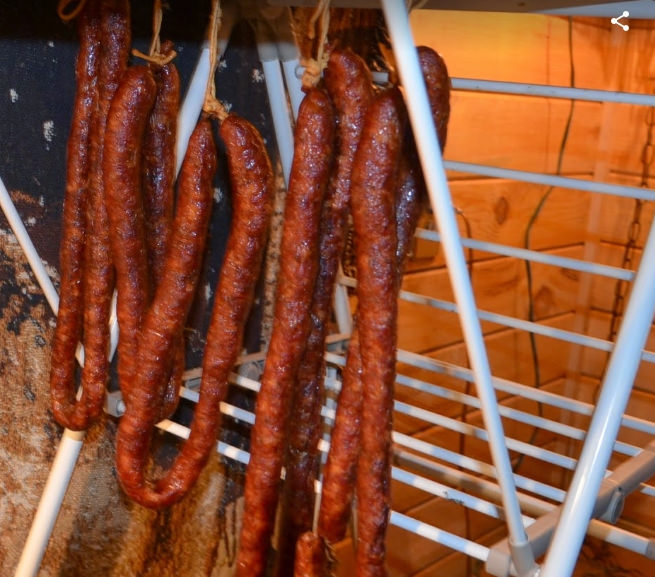 That's definitely interesting and I will be following this thread.
Those Kabanosy's look very tasty (to my untrained eye)
life is too short to drink bad wine (anonymus)
Top

Well chalk another one up to old school methods! At what temp did the IT finish at in the smoker and for how long did you smoke them?
Top

Bob K wrote:Well chalk another one up to old school methods! At what temp did the IT finish at in the smoker and for how long did you smoke them?

Isn't that the truth! Old school methods seem to be extremely sound. At times I feel like I'm trying to re-invent the wheel with my attempts at trying to understand the why's of it all.

Bob, I did stray from the procedure because I was making several things. One was cold smoked salmon and the other were some hams so I had all in the smoker while I cold smoked the salmon. About 4 hours I think. Then I removed the salmon and bumped up the heat gradually to peak at 170F and pulled the Kabanosy when the internal temp reached 155F then showered with water. I see in Marianski's Greatest Sausages book the procedure is to apply hots smoke at (40-50C) for an hour then turn up the heat and bake between 60-90C (185-190F) for an hour until the internal temp reaches 68-71C (154-160F)

If I recall correctly the last time I made Kabanosy I followed this temperature regime closely and ended up shutting the heat off and leaving the sausages in the smokehouse overnight. I think I showered them. These had that crinkled look and I'm pretty sure they were shelf stable the next morning since they dried more in the smokehouse.

Personally, I liked the flavor of the Kabanosy the best when it first came out of the smoker and before it dried further but what it would seem to me is that if you want to make them shelf stable one should follow the procedure using the higher end of the smoking temperatures and finish at an internal temp of 160F (71C) as this should dry the sausages more than what I did this time and they should be stable after a short hang overnight.

The other thing I wonder about is if say I was to truly do this old school and use salt peter and allow the meat to cure for two or three days before working if the natural lactic acid forming bacteria wouldn't lower the pH where the sausage would be shelf stable at a much higher moisture level. In my view this would give you the best of both worlds in that I liked the sausage best when it had just come out of the smoker.

The other thing I wonder about is the need to even refrigerate it when finished if you have reasonably cool ambient temperatures. I did refrigerate the bulk of the sausage but this only delayed the drying and since my kitchen stayed around 60F was this any more risky than hanging meat in a drying chamber. I don't think it would and think next time I make this I'll just hang all of it in the kitchen and call it done since even though it may not be "shelf stable" immediately it will be stable in a short time. I don't know am still learning but it seems reasonable to me at this time.
Top

Devo, why do you say you won't make them again? Do you not care for the flavor or what? I like them myself. Just curious.
Top

Butterbean wrote:Personally, I liked the flavor of the Kabanosy the best when it first came out of the smoker and before it dried further

I would bet the casings are more tender at that point also, especially if you used collagen. And from a commercial view a lot less shrinkage. While shelf stable may be the goal in many instances, nothing wrong with "keep refrigerated"
Top

I agree but the idea of making things shelf stable just intrigues me to no end. Just seems to be a testament to the ingenuity of mankind.

I actually used sheep casings but I can't help but wonder what the end result would be if there was a pH drop during the curing process if I went completely old school and went with a longer cure using nitrate. Or would there be enough of a without the use of a culture to make any difference? Don't know but it might be worth playing with. Maybe next time. So many questions and so much to learn and so little time.

Butterbean wrote:Devo, why do you say you won't make them again? Do you not care for the flavor or what? I like them myself. Just curious.