Reading through the forum yesterday and came across Sweetheart Ham recipe posted by Butterbean.
http://wedlinydomowe.pl/en/viewtopic.ph ... theart+ham
I had just bought a pack of 2 very nice pork sirloin roasts weighing about 1 kilo each and decided to give it a try, cooked up the brine, let it cool and put everything in a plastic tub and into a cold (50F) garage.

It should be at refrigerator temps, 40f max
Top

So i made this just as recipe but did not inject brine, hot smoked with oak pellets for 2 hrs, started off at 150F, gradually brought temp up to finish at 250F over 6 hrs.
Internal temp 155F 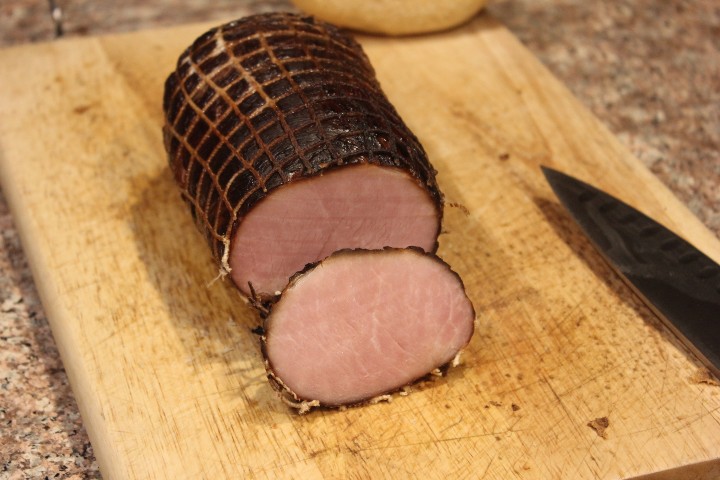 That looks beautiful Fusion and I'm glad you liked it and thanks for giving feedback.

Another thing I do with these is to not cook or smoke at all and simply slice then freeze till you need it then pan fry. Its good that way also. Also, sliced thin like you have it cooked makes great sandwich meat.
Top

I will try that, im very sure i will be making more of it.
Top

Thank you Fusion for posting that nice picture and process of smoking. And sorry but it is My Point of View on your nicely overcooked, baked piece of meat. Here we are to present, show, explain and give opinions on culinary/meat processes, so please do not take my words like total criticism of your work. IMO - vacpack won't help to mellow outer burnt ring. Most likely inside your meat is also dried, not juicy like it should be. But if you are consider that it is grilling or barbecue that is different story.
In BB recipe and your process is not specified how much brine per Lb/kg of meat you are used.
Question #2 - really is there 342 grams of total sugar per 1 Gal. of water? Reason I'm asking is that from mine knowledge sugar is absorbed 10X slower than salt so most of it is not inside meat plus, in recipe is rinsing so in other words - washing it out of surface, plus sugar left on surface will caramelize very quickly and will make difficult for smoke to penetrate a meat.
BTW - it is a good idea to do that ? Butterbean wrote:Another thing I do with these is to not cook or smoke at all and simply slice then freeze till you need it then pan fry..... Amount of Cure plus days of curing plus days in freeze plus then high temperature - what happen during high temperature process with nitrates...... Polish moguls trying to avoid as much as possible to use high level of Cure in meats processed in high temperatures.
Again - it is only my opinion, I can be wrong too.
Top

StefanS
Thank you for your thoughts on my post, most of your questions i can not answer as i am very new at this.
I can however tell you the inside of the Ham is very moist and tasty, the "burnt" look to the outside is where my AmaZeN pellet smoke generator was a little to close to the ham.

As i said, the rest of your questions and suggestions will need to be answered by a member with more experience than me.
Top

Stefan, I really don't follow what you are saying. Don't know where nitrates came into this since no nitrates are mentioned and had they been used it would require heating the meat to 600F to convert any of the nitrate to nitrosamines and the only thing I cook at that temp is pizza in my stone oven.

Yes, you are right about the slowness of sugar absorption and that is why there is 342 grams and not 34.2 I'd guess. The sugar is more of a flavor enhancer. Gives the ham a sweet background.
Top

Butterbean- A frying pan on a stove top can easily reach 600F. Natural gas burns at 2000F , thus all the cure rules on bacon.
Top

Sorry Butterbean for confusing you. First at all my mistake for nitrates - it should be nitrite - like sodium nitrite in Cure #1. Then - meat curing in brine - 95% of meat used in "wedzonki" is cured in brine. During preparations to do that we (means polish sausage makers) considering a few things like weight of meat, days of cure, amount of brine per 1kg of meat (usually 0.4-0.5 litre/1 kg), injections or not, even what kind of meat is used to brining (example - pork loin is absorbing salt much faster than pork belly, or pork shoulder). For that purposes there is prepared tables developed by researchers and professionals (some of them already on our website).
Amount of sugar is also used in small quantities - as you know - it is also bacterial food - so even low curing temperatures (in refrigerators) sometimes not doing a required process (usually during more days of curing ).
Hopefully that is making a little more sense to what is IMO.
Top

Here is a variation on Butterbeans recipe that was equilibrium cured instead of brining.
After curing for 3 weeks in the fridge, light smoke at 130F for 6 hrs, then sous vide at 152F for 6 hrs the following day.