by Devo
Someone I know would like some information on it.
He knows it is cognac. He assume it was distilled in Russia, or assuredly part of the former Soviet Union. He can't seem to find anything on this particular brand.
Any further information any of you could give me would be greatly appreciated. 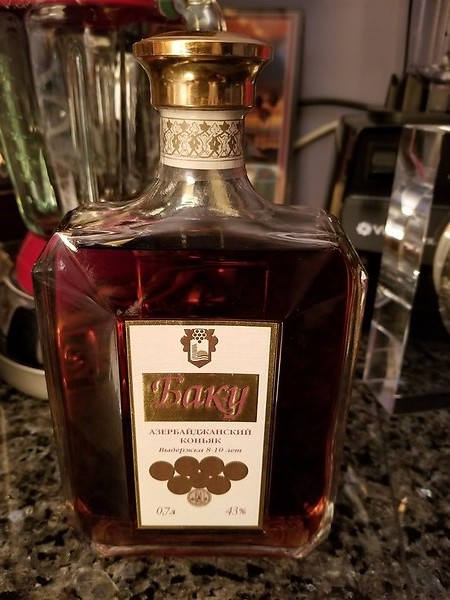 by redzed
It is cognac from Azebaijan. Baku cognac is a well known brand. There is a long tradition of cognac production in Azerbaijan and neighbouring Georgia and Armenia, as they are wine growing regions.
by bolepa
redzed, I partially agreed with you. You are right this cognac is from Azerbaijan, former soviet (USSR) republic. Azerbaijani cognac never was considered a "good" cognac in former Soviet Union. Georgian and Azerbaijani cognacs used to be considered just "OK" cognacs. On the other hand Armenian (especially five stars) was the best one and second one in that rating line was cognac from Moldova - also former soviet republic - so called "white stork". None of those cognac can be compared with any decent French cognacs, IMO. Last time I tried those cognacs was almost 30 years ago and my taste is based on that experience. Who knows, maybe quality of their cognac's has changed since then but I really doubt that.....
by Devo
Thanks to both of you. Figured someone on here would have some background on it.
This is why I was asking the question for my friend. Here is his story.

"One of my friends passed about a year ago.
Before he died he gifted me with this bottle of cognac. He knew I had a taste for Brandy.

During his life my friend was a very high ranking figure in Indiana academia. He was renowned in several international circles.
He shared time in his home with the Dalai Lama among many others.
One of the others was Mikhail Gorbachev, who was also a visitor in my friend`s home. On one of these visits my friend was gifted with this bottle of Russian cognac, which was later gifted to me.

I was never personally in the company of Mikhail Gorbachev. (I'm a nobody) I do have pictures of my friend and Gorbachev together in his home.
This is just a small bit of political memorabilia that I would like to know a little more about. Yea, I know, I've got too much time on my hands."
by Butterbean
I'd be hard pressed to break the seal on that piece of history but then again there is a curious side to me that would encourage me to do so. Don't know what I'd do.
All times are UTC+01:00
Page 1 of 1
Powered by phpBB® Forum Software © phpBB Limited
https://www.phpbb.com/