Holy moly!! this was an old post. I have since started doing cured meats regularly (approved by the local EHS). With much trial and error I believe I figured that problem out....
1st......I cut back on the amount of bactoferm; 6g. per 5lb (I use SPX also FM52)

2nd.... I use a mixer to work dough and develop miocene instead of by hand (mixer will aid in keeping dough cold) and add the fat at the very end of the mixing process. You have to develop the miocene, I mix until the dough sticks to the side of the mixing bowl. It is very tacky to the touch, this is why the fat goes in last or you risk over working fat and breaking it down.

3rd..... I stopped grinding fat (large die), it over worked fat and macerated it. I cut the fat while frozen on a slicer(sorry but I work in a commercial kitchen so my slicer is commercial grade). First I cut the fat into strips, stack them and cut them in the opposite direction into little pieces. It tends to clump so I take it straight to the freezer in batches on sheet pans for about 4 hours. Then, in small batches I remove the frozen clumps from the freezer and break them apart by hand and pulse in a Robo Coupe (commercial food processor). Then right back to the freezer on another sheet pan for 1 more hour. Once finished I break apart any other clumps. The fat feels like loose 1/4"gravel. I do this in 60lb batches and store in the freezer and take some out as needed. Even your body heat will start to melt the fat, especially a lard pig. Unfortunately you have to cut by hand while frozen in small batches, unless your slicer can handle the frozen fat.

4th....I suffered some case hardening (I was curing in 60% humidity, I now start at 90% and work down to 60%)and fat smearing from the grinding process, so my Salami would over ferment. The PH would drop very low (4.4 at times with 16g. bactoferm per 5lb) and sour the Salami (similar to vinegar). This, as a result would break down the fat even further. I also do a progressive grind leading up to 1/4lb of meat that is cut by hand to allow water to leave the Salami at a steady pace (I used to grind the meat in a small die only).

5th....I do 1lb fat per 4lb of meat. I allow 1/2 pound of fat into the progressive grinding process but only through the large die. The other 1/2lb is what I cut with the slicer. The fat in the grind gives the Salami a creamy texture.

If you have a Hobart, a 12" 1/4HP should cut frozen fat. It`s a Hobart you can push those machines (but not your fingers!). It may be the Pig but they make great Lardo so I don`t think it`s the unsaturated fat. But I could be wrong, I often am! Those are the things that I did and still do and it solved the problem thus far. I am jealous that you were able to process that pig! That is a dream come true! I hope this helped and good luck![/i]
Top

1shertzer, thanks for sharing your discoveries with us. There's nothing like good ol' trial and error to iron out the details.

TaliskerJones wrote:Could it be that the high monounsaturated fat levels in the Mangalitsa's back fat makes it softer and thus more likely to smear when sliced thinly?

Hey Talisker - I raised a couple of mangalitza/tamworth crosses to about 325 lbs and they had about 3 inches of backfat. I have also noticed that the fat is softer than usual on these pigs, though not so much as what you describe (liquid leaf lard). I really like the taste of the fat and have been putting more than usual in my salamis. It is creamy, but not greasy. It makes great lardo too. But you have to be extra careful with it.

When poaching sausages made from this pork, I have to be very careful to bring the temp up slowly, and never exceed 165F or it starts to melt.

Regarding salamis, I don't think slicing is the issue - it's how you make the salami. If you don't smear the fat, you can slice as thin as you want. If you smear it, even thick slices are going to feel greasy in the mouth. As 1shertzer mentioned above, taking great care not to smear the fat while mixing is the key. Use only the backfat for sausages (except for spreadable types). Grind it near frozen with a nice sharp blade and a medium sized plate, break it into pebbles and mix it into your very cold meat right away. If you let it sit, even in the freezer, it becomes a blob, and by the time you've mixed that blob into the meat it is starting to smear.

Well, I'm not telling you what to do, just what has worked for me through trial and error. The suggestion to work up the myosin in the meat first, then add the fat, is a good one and I'm going to try it.

Thanks so much for responding, guys! And sorry for resurrecting such an ancient post - it just "hit close to home" so to speak.

1shertzer,
I used FM52. Was it sour? Yeah, I suppose. How much? Dunno exactly, I didn't use a PH strip. I certainly will next time. But it was pleasant and not overly sour. Certainly not vinegar. Not sure if I'll go for SPX since I already have some FM52 sitting in the freezer and the flavor wasn't bad at all last time.

I definitely did not build up the tackiness in the meat enough prior to adding the fat. I will do that next time to ensure a tighter salami, and before adding the fat.

I have a 1712 Hobart commercial slicer which I believe has a 1/3 HP motor (thank you, Craigslist!) Though I'm not sure I'm as hardcore as you are about your fat. Last time I ground the fat and then put it back into the freezer which obviously caused some clumping. This round I will grind it 'ala minute' and add it immediately to the meat as the last step. I don't feel my fat smeared the last time, though. Clump, yes. Smear, no.

Finishing room in my case is a wine cellar. Over the winter, I was running over 80% humidity with a big, evaporating pig carcass (in the form of pancettas, hams, loins, jowls, etc) but now that it's warming up here in Northern CA, the A/C is kicking on during the day and the humidity is closer to 60%.

Cabonaia,
Yeah, the backfat on this sow was crazy thick - over 3" for sure. The belly was almost 6" in parts! I was joking with the guy who raised her that if I rolled it it would make a pancetta over a foot in diameter! Needless to say, I didn't roll the pancetta...

I did cut off a couple pieces of back fat, salt heavily, add a healthy dose of fresh herbs, vacuum pack it and set it in my wine cellar under a few heavy bricks. I'll try it out in another 3 months (6 months in total).

But yeah, I made two attempts at mortadella and both were abject failures. They both oozed fat like crazy even when cooked at moderate (155F) temp in a tightly controlled sous vide.

As for smearing the fat, I don't feel I smeared it. And the salami's mouth feel is pretty awesome (and I'm not the only one who thinks that way - many of my friends and family agree). But I really like your suggestion of grinding and mixing the fat at the last minute and will use it next time.

Will let you guys know how it works!
Top 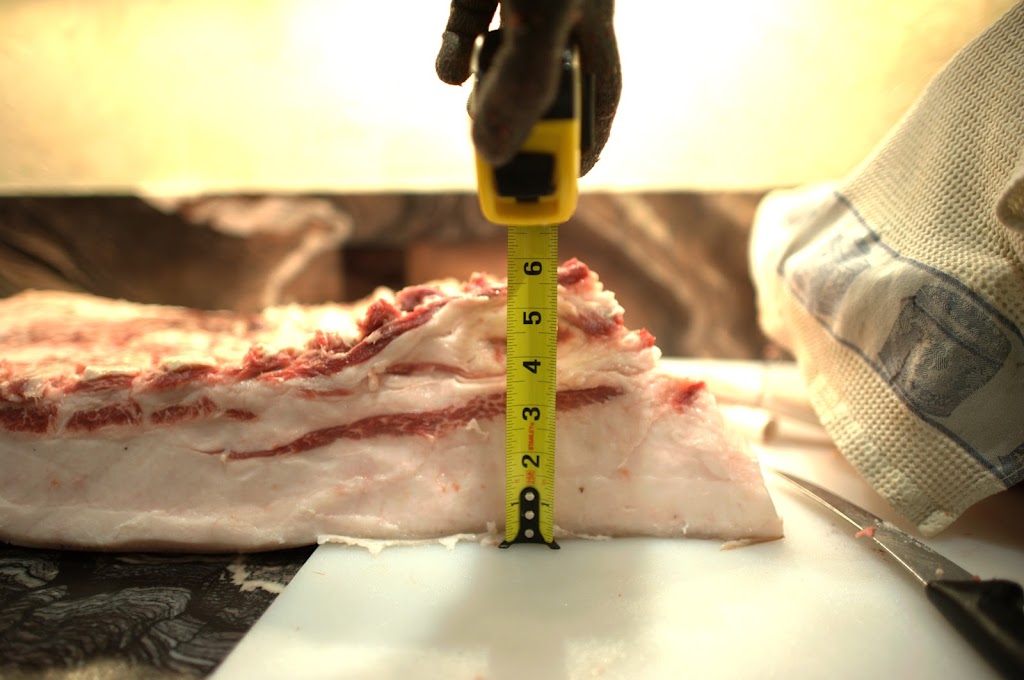 The belly on the Mangalitsa sow I was working on.
Top
Post Reply
20 posts