Dang it, CW, don't give ALL my secrets away!

The mallet is not far off. I used a cheap coffee grinder and just barely ground the pepper.

The pepper is actually one of those multi-colored "pepper melange" mixes that is sold in stores that sell pepper grinders that are more attractive than functional. I add coriander seeds (about 1/4 the volume). The size distribution generated by the coffee grinder is really wide- everything from not ground to fine ground. I dried the pork with paper towels, then rubbed it on. If you then take a picture with a cheap phone, it looks pretty good.

That was kinda wordy. Damp but not wet pork, wide particle size distribution, rub, all add up to the pepper mix sticking pretty well. The Elmer's glue is optional, as is the original recipe's suggestion of honey or maple syrup. ...or, in CW's case, some of that sheep dip that he uses for eau de Cologne.

P.S. We use this pepper mix on salmon, too, on the grill. A little oil or bacon grease helps it stick. Try bacon grease, Phil. Bacon (grease) goes great with anything edible. ...maybe even RedZed's hallucinogenic mushrooms.

I couldn't find any mapleline

When I looked for Mapeline on the web, some sites said it was just maple extract. I found Wagner's Maple Flavor which is a somewhat diluted maple extract at the grocery store. I used it and I was able to detect the flavor in the finished CB. I don't know how widely distributed it might be.

Garlic bulbils grow in the scape and are most often used to grow new garlic but they can be eaten too. I have acquired some from a local commercial grower and they have a very strong garlic flavor and I want to try them in some fresh sausage. If anyone has used these in sausage I`m curious about the equivalency to a clove of garlic

The addition of 200 grams of backfat is to make up for missing fat in game meat. Game meat is notoriously void of fat. It must have some (pork fat) added to be able to chew it. If you are using pork butt, you already have the right amount of fat added... courtesy of mother nature.
If it looks like a duck, walks like a duck, and quacks like a duck, it probably needs more time on the grill!

My pork loin is lying in the pickle, weighed down with a bag of water (next time I will make more pickle for inside the plastic bag in case of leakages).
The loin is fully submerged so there shouldn't be any need to turn it, isn't it?

Cut up some pork shoulder and now need to decide on a type of sausage to make (some fresh and some smoked), so slowly proceeding......
life is too short to drink bad wine (anonymus)
Top

The pork loin pictures will come later (after smoking it).

For now: super spicy sausages (based on L. Poli recipe for Goan Chourico)).
Because of the spicing I was going to call them CAGLIBID sausages
(Chuckwagon Ain't Gonna Like It, But I do 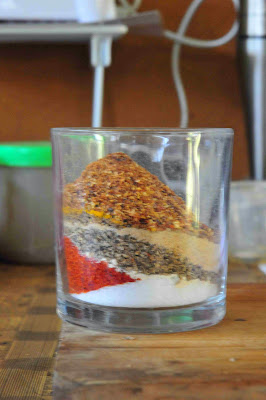 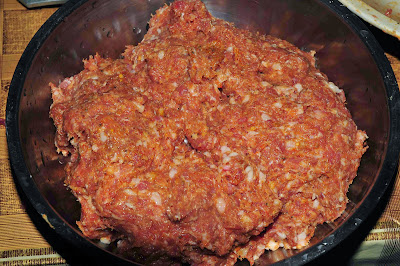 Spices and cure mixed with the first kg of mince 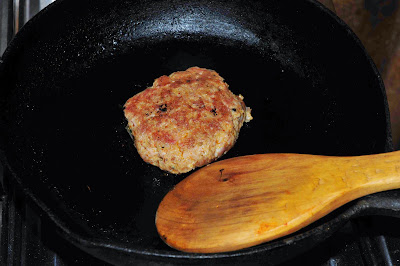 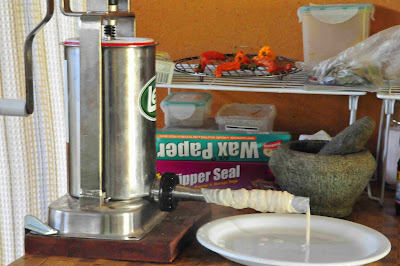 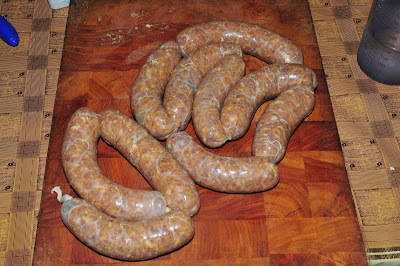 First batch of sausages. I made them in one big link and separated them into smaller ones later on. There were a couple of air pockets which I should have pricked, but I didn't 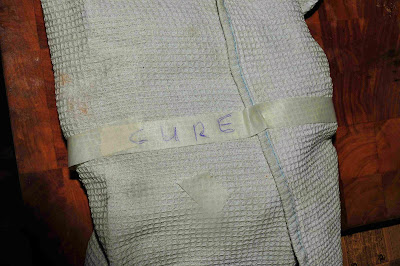 Making sure I don't mix up the cured and uncured sausages 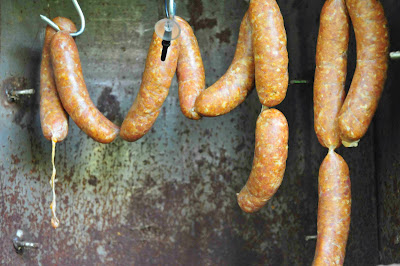 Hanging in the smoker (I couldn't find my string, so had to make a different plan to hang them) 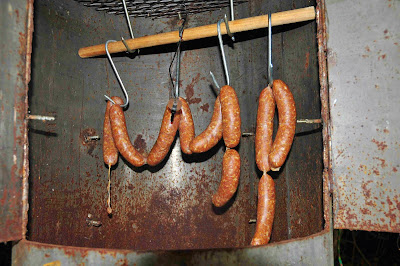 Just another pic of them hanging inside the smoker 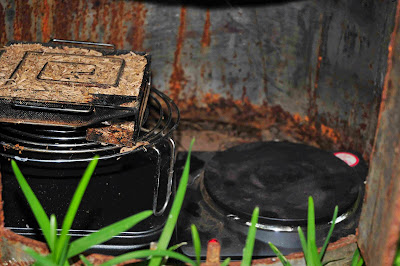 Set up with proQ cold smoker and hot plate 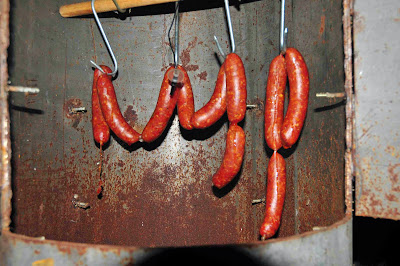 After 3.5 hours smoking at 40-45 oC
I then took them out and put them into 69 oC water and kept them there till the internal meat temperature was 65 oC, took them out and cooled them.
While I did this, I was wondering if it isn't easier/better to skip this step as I am not going to eat them cold. I will either heat them up in water to eat as is, or use in stews or soups.
Or, while I am philosophising away), I could cook them to a slightly higher temperature and then leave them to dry, just like kabanosy? 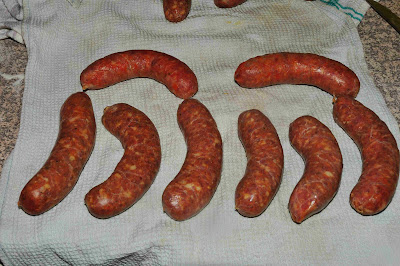 After a night in the fridge: the top 2 sausages are smoked and the bottom row is fresh
life is too short to drink bad wine (anonymus)
Top

Hi Anne Marie,
I bet they taste rather good, better than you can buy anywhere!!!!
Your next project??????????
Thanks for posting your recipe and photo's.
Jan,
Top

Made my homemade sausages the other day. I don't have a very good imagination, so I'm just going to call my sausage Marjoram Sausage. Can you guess what herb I added?

The cured were smoked for two hours in hickory. Both the fresh and cured sausages were tasty, but the cured were a bit too salty. Next time I would cut down added salt to account for that in the cure.

The casings were soaked for 24 hours and were nice and tender on the fresh, but on the smoked were a bit tough. I raised the smokehouse temperature 4°F every 20 minutes. They reached 152°F in four hours. Was that too fast?

All sorts of learning experiences here. I had trouble getting casings on horn so used a smaller horn. Big mistake. The problem was due to an occasional twist of the casing not the horn size. Using smaller horn caused lots of air pockets, some blowouts and non-uniform stuffing. Practice makes perfect. Gee, I need lots of practice. You just can't do this once a year and remember!

Smoked on left and fresh on right:

You might have a point with the air pockets, David!
The casings I have are just a tad too small for the biggest stuffer so I use them on the middle sized one and ended up with a couple of air pockets.
Nice looking sausages!
life is too short to drink bad wine (anonymus)
Top

Sambal, it is important to lance all the air pockets as soon as you can before the casings dry. Just use an ordinary needle for this. You don't need a special tool. A single sewing needle (clean) is sufficient. The holes will seal themselves off. If left as is, the air pockets may develop anaerobic molds in them. Best to "deflate" 'em with a needle.

They reached 152°F in four hours. Was that too fast?

That's plenty fast pal. Ol Rytek would recommend twice as long with only a 2° rise in temp each twenty minutes.

Me bad - no photos. I made a bratwurst - 2/3rds fresh, and 1/3 with cure and smoked for 2 hours with hickory then slow prep cooked to 148F then doused in cold water to reduce IT.

I attempted to separate the fat from the meat and adding back fat to make up 20%, freezing it and grinding thru the 3/16" plate. What a struggle that was.

I had the fat frozen rock solid and my new LEM #8 did not like it one bit. I reorganized and went to the 3/8" plate while the fat lost its rock hard structure. My other mistake was not cutting the fat into smaller pieces which I had treated like the meat. I then cleaned the grinder neck and parts while the fat went back into the freezer to chill. It went thru the 3/16" plate this time so I ended up with a bunch of fat worms.

So then I tried to fold the fat into the meat mix - yeah sure. The fat became so sticky that it formed into lumps and didn`t mix well. After a small seizure we got the mixer out and force mixed the lot while DW was sure the mix would be emulsified. Got through that late in the evening.

Let it rest overnight, stuffed, smoked the cure mix and froze the fresh links. About my worst day in sausage making but we had a couple of fresh links for dinner and they passed muster.
Phil
Top

I was finally able to get the CB done. First thing I learned was injecting the pork loin was more of a challenge than I thought it would be. Trying to keep all of the brine from leaking out of the needle and not all over place was interesting. Then pulling the needle out of the loin and not squirting all over. I finally figured out that nice and slow was the way to go. This was the best Canadian Bacon I have ever had. My oldest son was visiting and he took 3 pounds home with him too. I smoked it 2 hours with maple smoke, it didn't seem smokey at all. Next time maybe I will try hickory or 3 hours of maple. I only covered 1 piece in pepper because the wife does not care much for to much pepper. It was not to peppery so next time I think I will cover all of them in pepper. It also took about 8 hours to finish, it was a little hard to not turn up the the heat but I let it go at 200 and did not turn it up.

Here it is in the smoker.

Here is it being sliced up to vacuum pack and freeze

Graybeard that looks terrific! We make a lot if it but DW insists on calling it ham, which seems to get her past the idea of eating bacon for lunch.