Does this mold look ok ? I guess you need to copy and paste the URL ?

It doesn't look appetizing, but it will be fine. See more info in link posted above.

If you get some mold 600 and use it several times in your chamber, white mold will dominate.
Top

Thank you Bob K for the help.

These have been in the cure cabinet now for 3 weeks so I decided to
Wipe them down with apple cider vinegar and they cleaned up perfectly. I also dropped the humidity from 85 to 80 and ordered some mold 600 that should be here by end of next week and I will spray them down with it.
Top

I think you should have left the mould on. Although one cannot tell whether it is a "good" or "bad" mould from colour alone, in all probability the mould on your salami was more beneficial than harmful. As I wrote earlier, unless it is black or red in colour, it can be left alone. At the most you can brush it of. Using vinegar is a last resort. You not only remove the mould but other surface enzymes that affect the flavour and character of your salami. And inoculating the salami with P. nalgiovense after four weeks of hanging will really be of no use. The proteolytic enzymes produced by the mould are most active in the meat during the early stages of maturation when the mould spores are actively colonizing the sausage. After that the mould helps with slowing down the drying and decrease case hardening.

Take a look at this video, especially at the sausages being removed from the chamber at the 3 minute mark. Have no fear!

Thanks redzed
I watched the video and the salami looked pretty much almost like the mold on mine. I did notice that the man poked holes all over the casings after filling them what is the benefit on doing that ? Also what is the white stuff in the box they rolled the salami in at the end ?
Top

Poking holes in cased whole muscle cuts and sausages is a matter of course with dry cured products. We do that to make sure the casing adheres properly to the farce and to expel any trapped air inside. Air means oxidation and oxidation means off flavour and even spoilage.

The white pwder the French butcher is using is a flour product, the most common is rice flour. Many commercial producers use this trick for aesthetic purposes. So if you are buying salami somewhere and thinking that you can use the peeled casing as a starter with your own salami, make sure it's really mould.
Top

As most folks know white = pure which is why everyone quotes that only white mould is alright, but in all honesty all colours of mould are fine all it means is that you do not have your humidity dialed in-- so long as things are not slimy then things are fine 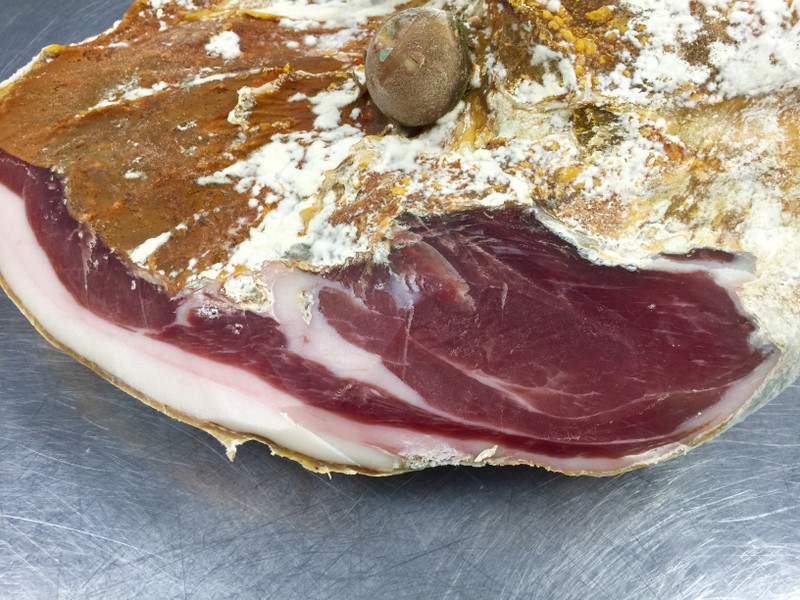 I have to disagree with any general statement that all moulds occurring on meat products are acceptable or desirable. And colour alone does not tell the whole story and is not the only identifier of the genus of a particular mould. The only way we will know is if we take a microscopic sample and positively identify the particular strain. The multi coloured mould that we see on European products sold to the public are with flora that has been tested and identified as being non-toxic and desirable on the products. Producers regularly test the moulds and know exactly the strains that occur on their products.

While it is true that the greater proportion of moulds that occur naturally on meat products are genera Penicillium and Aspergillus, there exists the potential for the development of problems and safety if you want to leave everything up to the environment. The following are excerpts from a chapter written by meat scientists, Elisabetta Spotti and Elettra Berni, in Fidel Toldra's Handbook of Fermented Meat and Poultry, pp. 172-173.

Natural contamination results in a prevalence of
xerotolerant strains belonging to the genus Penicillium
subgenus Penicillium over those belonging to
more xerophilic genera such as Aspergillus or
Eurotium. This is due to the easier growth of most
Penicillium species in environments with RH ranging
from 85 to 92% and with temperatures from 10-20°C
(see Table 16.1). A minor percentage of growing
molds consists of hydrophilic fungi producing darkish
mycelium and conidia, such as Mucor spp. and some
Scopulariopsis spp. These species must be removed
because the former do not allow homogeneous drying
of the product in the first steps of the process and the
latter can produce an unpleasant ammonia odor
caused by their strong proteolytic activity in the final
step of the ripening (Dragoni et al. 1997; Lücke 2000;
Spotti and Baldini, personal communication 2005).

The ripening techniques considered positive and
normally applied in industrial practice usually allow
for the growth of characteristic whitish molds, which
can also inhibit the multiplication of other molds,
especially those that prove to be potentially toxinogenic
and/or with a mycelium having undesirable
color (Baldini et al. 2000). In particular, recent findings
showing that many of the Penicillium and
Aspergillus species frequently found on the surface
of dry sausages have the ability to produce mycotoxins
in the actual product, have stressed the importance
of possibly controlling contaminating molds
on raw sausages during ripening by using mold
starters. Starters studied in the past were selected
and are now available on the market (Leistner et al.
1989). They have been shown to impart a desirable
appearance and good technological and sensory
characteristics to the product, to be unable to synthesize
antibiotics and/or toxic metabolites such as
mycotoxins and to not cause well-known allergies or
mycoses. For the reasons above, they can be used to
inoculate fermented sausages by spraying or by
immersion in a spore suspension.
The selection of fungal starter cultures among the
molds that naturally occur on the surface of fermented
and ripened sausages allows control of
molding in the first steps of the process and makes
the starter presence predominant.
Among the starters that can be considered both
safe and effective, P. nalgiovense has been frequently
isolated on the surface of ripened meat
products as a "domesticated species" from P. chrysogenum
(wild type) (Pitt and Hocking 1997). At present
it is routinely used as starter culture in many
traditional productions, and so it is often present in
the air of environments. Apart from P. nalgiovense,
various strains of P. gladioli are usually considered
acceptable because they are nontoxinogenic and
result in desirable flavor and appearance due to the
grey color of mycelium (Grazia et al. 1986). Even
P. camemberti should be considered a starter
culture for the meat industry because of its ability
to improve the sensory characteristics of dryfermented
sausages (Bruna et al. 2003).
P. chrysogenum has been mentioned too as a suitable
starter for mold-fermented products (Hammes
and Knauf 1994; Ministero della Sanità 1995),
because some nontoxic strains have been shown to
produce proteases that contribute to the generation
of characteristic flavor compounds in dry-fermented
sausages (Rodríguez et al. 1998; Martín et al. 2002).
However, P. chrysogenum is not always considered
acceptable in industrial practice because its albino
mutant may start producing green conidia, and most
of the strains tested may produce antibiotics and
toxic substances such as roquefortine C (Pitt and
Hocking 1997). Other strains belonging to Penicillium
species have also been excluded because they
produce dark-green conidia that may impair sausage
outward appearance.

So what we can take away from the above, is that there are risks that we assume if we leave everything to nature, and erroneously conclude at all moulds are safe. At the same time while some moulds may not be toxic, they negatively will affect the taste of the product. So for this reason I caution everyone, especially the guys who have recently started in dry curing meats to do your homework, make well educated decisions, and proceed on a foundation based on science. Of course the level of risk may be low, but in the end, if you, your family or friends get sick, is it worth it?
Top

redzed wrote:I think you should have left the mould on. Although one cannot tell whether it is a "good" or "bad" mould from colour alone, in all probability the mould on your salami was more beneficial than harmful. As I wrote earlier, unless it is black or red in colour, it can be left alone.


BriCan wrote:As most folks know white = pure which is why everyone quotes that only white mould is alright, but in all honesty all colours of mould are fine all it means is that you do not have your humidity dialed in-- so long as things are not slimy then things are fine

redzed wrote:I have to disagree with any general statement that all moulds occurring on meat products are acceptable or desirable. And colour alone does not tell the whole story and is not the only identifier of the genus of a particular mould. The only way we will know is if we take a microscopic sample and positively identify the particular strain.

Reading through this string it gets confusing.
Top

Yes it may sound contradictory at times, but why I stated that bcuda's mould was probably fine was based on my expeirience with similar looking moulds. And yes I went wiith colour alone but there were no black or dark brown spots, and no red. I would never state that you should accept a complete spectrum of colours on your salami. There is always risk, but the risk is lower when we accept white and bluish/greyish colours over all others. And I would advise buying a commercial starter and introduce to the chamber by sprayng the inside as well as the sausages. P. nalgionvese performs well and does a grat job in dominating over other moulds, adds to the flavour and helps in drying.
Top
Post Reply
12 posts • Page 1 of 1