The only time I thought the recipe was too salty was when I sliced a chunk to sample right out of the smoker. Now I remove the pork loins from the smoker at 150°, soak them in ice water for a hour, dry them off and refrigerate overnight before slicing. I inject and brine-soak for five days with CW's recipe, happy happy every time. RAY
&#8220;Good judgment comes from experience, and a lotta that comes from bad judgment.&#8221;
Top

CW - I'll be taking the loin for back bacon out of the brine tomorrow. Last time after leaving the patted dry loin in the fridge overnight I rubbed the loin with some oil and then rolled it in crushed black pepper thinking the oil would help it adhere. A lot came off. Please advise when and how you do yours so that the pepper stays on the loin. Thanks
Top

Shuswap, I almost hesitate to tell you our ol' family preference. It's messy as hell.

We actually take the prep-cooked (baked n' smoked) loin and rub it with our famous Vernal honey. We roll the Canadia Bacons in cracked black pepper then then wrap them in butcher paper with the one-sided plastic coated surface up against the meat. Wrap it up like a present and tape it. Put it in the fridge and forget about it for 3 days. After that, slice 'em and let the cross sections hit a hot black skillet brushed with a bit of butter. The meat will have a rim of sweet and just enough pepper to make your tongue slap the snot out of your tonsils! I slice a Kaiser roll and put just enough of my home made mustard on the meat to barely "hint" at mustard flavor. The ham is where the deep flavor is. When it has been threatened in a super-hot black skillet, the sugars will caramelize. Careful not to over-cook the meat! Then put a little lettuce and a tiny smear of mayo on your sandwich, and you'll be in heaven! Once in a while I put a slice of tomato on the thing but it must be thin. I cut tomato slices so thin that they only have one side!

Shuswap, I smoked mine last time and just took the loins from the brine, rinsed them then just rolled them in cracked black pepper. this was the out come

Keep them safe until they all come home.
Top

Krakoska, it`s the pepper on the plate I want to keep on the loin. Your pre-smoke photo looks terrific - did you coat the loin with anything to hold the cracked pepper?

CW - you should have seen DW`s face when she read your post - she`s Type 2 but after some persuasion on how much of that honey would actually be left on the slice after browning she gave me the go ahead.

Krakowska, it`s the pepper on the plate I want to keep on the loin. Your pre-smoke photo looks terrific - did you coat the loin with anything to hold the cracked pepper?

No, Just rolled it until it would not stick anymore, Yes you will loose some but cannot be helped. By the way, this was Chuckwagons directions I followed. Came out super. Just a note, the next time I make this I will soak the loin in cold water to draw some of the salt out. I did not do it with these in picture, a little bit too salty for me.

CANADIAN BACON &#8211; Reaching for the moon

After my first attempt that I cooked at 325 producing what SSORLLIH called roast pork, I have made my second batch of Canadian Bacon with some success.

Sorry for the terrible photo.

I used CW`s brine and followed his suggestion of adding honey and cracked pepper after the smoking/pre-cooking phase except that I used pure maple syrup instead of honey. It`s wrapped in butcher paper for the next 3 days. The taste test for breakfast passed muster.

Next time is the refinement phase. I'll soak the loin in cold water for 2 hrs to leach out more of the salt after brining. I'll substitute some of the sugar in the brine with maple sugar.
Top

That looks to have nice meat color Shuswap, tho the exterior is much lighter than what I usually end up with. I just put twenty pounds of pork loin using CW's recipe,(added Mapeline), into my Pro 100 smoker at noon to dry for two hours at 100°. At 2pm I put a pan of moist applewood chips on and raised the temp to 110°. At 10pm tonight I'll put in a fresh pan of chips and raise the temp to 130° for the next five hours, then remove the chip pan, close the dampers, and raise the smoker temp to 175. I doubt I'll reach a IT of 148° till 10-11 tomorrow morning. That's a lot of time difference for pretty much using the same temperatures. Might be due to me smoking a larger hunk of loin

I brine in a 165qt cooler for five days to not take up fridge space, added some half gallon jugs of frozen water after three days. When I took the loins out this morning I checked and their IT was 35.6°F

At the moment I B smoking!

sawhorseray wrote:tho the exterior is much lighter than what I usually end up with.

Ray, you have me thinking about how long the loin is in the smoker. Mine was 2-1/2 hrs compared to your 11 hours of smoke. How strong a smoke flavor do you end up with? We are looking for a light smokey flavor.
Top

I like a mild smoky flavor that's penetrated thru the hunk of meat. I like single malt scotch, but not with a heavy "peety" flavor. Same with meats I smoke, I use applewood almost exclusively because to me it's very flavorful without being overpowering. Awhile back I started adding a ounce of Mapeline to CW's brine, I like what that does also When I smoke salmon I coat the hunks with honey right before they go into the smoker, but salmon seems much softer and porous than pork, so it makes me wonder if honey or syrup on pork would prevent the smoke from penetrating. My, look at the time, it's the cocktail hour! RAY

PS: I'll have right about 12-13 hours of smoking time on top of the two hours drying time. When I remove the chip pan and raise the temp to 175° with the dampers closed, the smoke will really fire up again for a hour or so. The times and temps I run my smoker that CW recommends and that of the maker of my smoker are almost identical.
&#8220;Good judgment comes from experience, and a lotta that comes from bad judgment.&#8221;
Top

Did my first Canadian Bacon yesterday using CW's recipe but tweaked just a bit.
Had a 10 lb pork loin brined for 5 days. At the fifth day rinsed and soaked in cold water for an hour. Pat dry and tied up lion.
Into the smoker for 1 hour at 130 with no smoke.. Gradually bump up to 150 for 5 hours with smoke. Finished in the oven at 170 until IT was 150.
Family loved it. 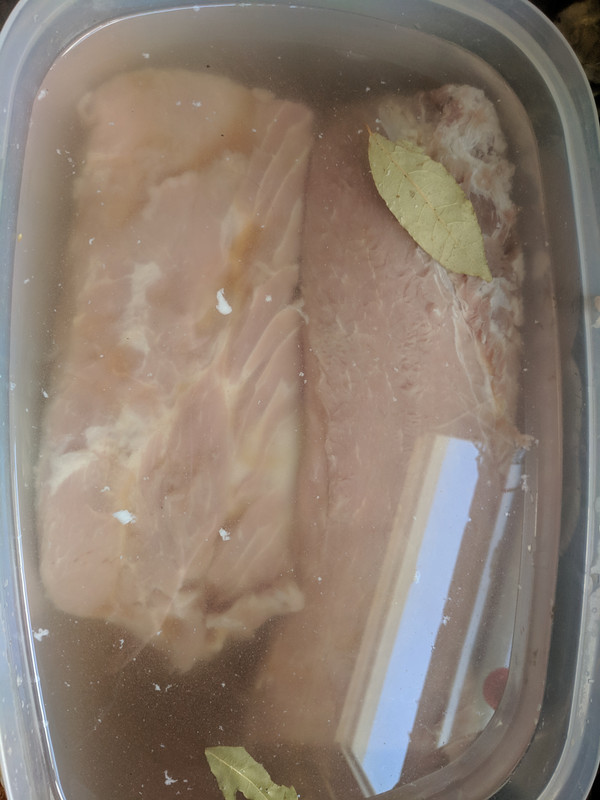 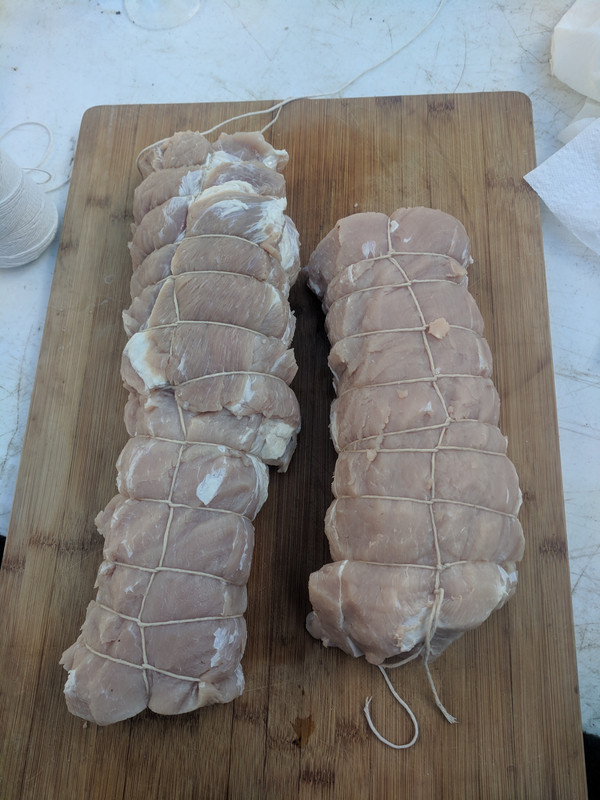 25 years ago I use to smoke pot. Now I smoke pork.
Top

Not sure what happened to the rest of the pictures. Sorry. I'm working on it.
25 years ago I use to smoke pot. Now I smoke pork.
Top