by joe_indi
I have hog, sheep and collagen casings but I wanted to try and make real skinless emulsified sausages.
The first time I tried it was with a piping bag.
I piped out long lines of sausage meat and then let them harden lightly in the oven at 65 - 70 deg C for about an hour.
The product was good except for the uneven shapes, plus the lower side was flat.
I tried rolling the meat in parchment paper, but it turned out too messy.
I then hit upon a solution.
I had some surplus curtain rods, 3/4" stainless steel.
I cut them into 12" pieces and fitted them one at a time to the business end of my sausage stuffer, and stuffed them end to end.
Cooked them at 65-70C for an hour in my oven.
They had become firm enough to be pushed out from the tubing.
But the 12" was a bit too long so I trimmed them down to 10"
The end product is cylindrical and of good to look at.
But one problem I have is the air bubbles that are present at some spots.
Even withe the imperfections caused by the air, this skinless sausage has turned out to be a success on the first attempt.
I now need to perfect the technique.
I wish I could post some pictures, but my free 30 days on Image Shack has run out
by joe_indi
Would my pictures be visible if I post their links on Google Drive?
by joe_indi
Well here goes:
Links for the pictures:
https://imgur.com/VtfPUdj
https://imgur.com/rrIFMqh
https://imgur.com/htbeh4b
https://imgur.com/jLmvIEC
https://imgur.com/Qx9zB1U
by joe_indi
Stainless steel shower curtain rod cut to size.
The edges have been de-burred 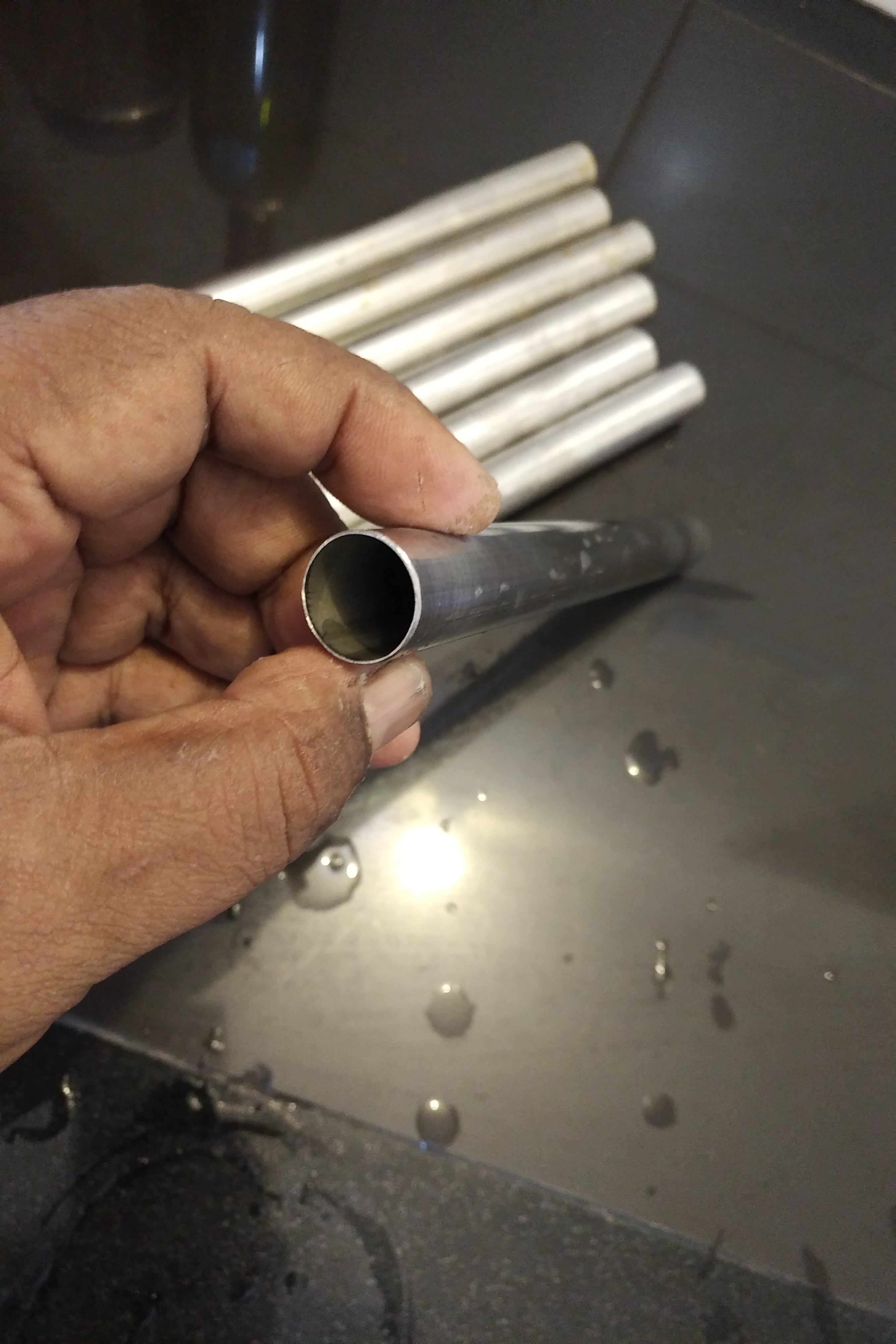 by joe_indi
This tube fits perfectly on the stuffer 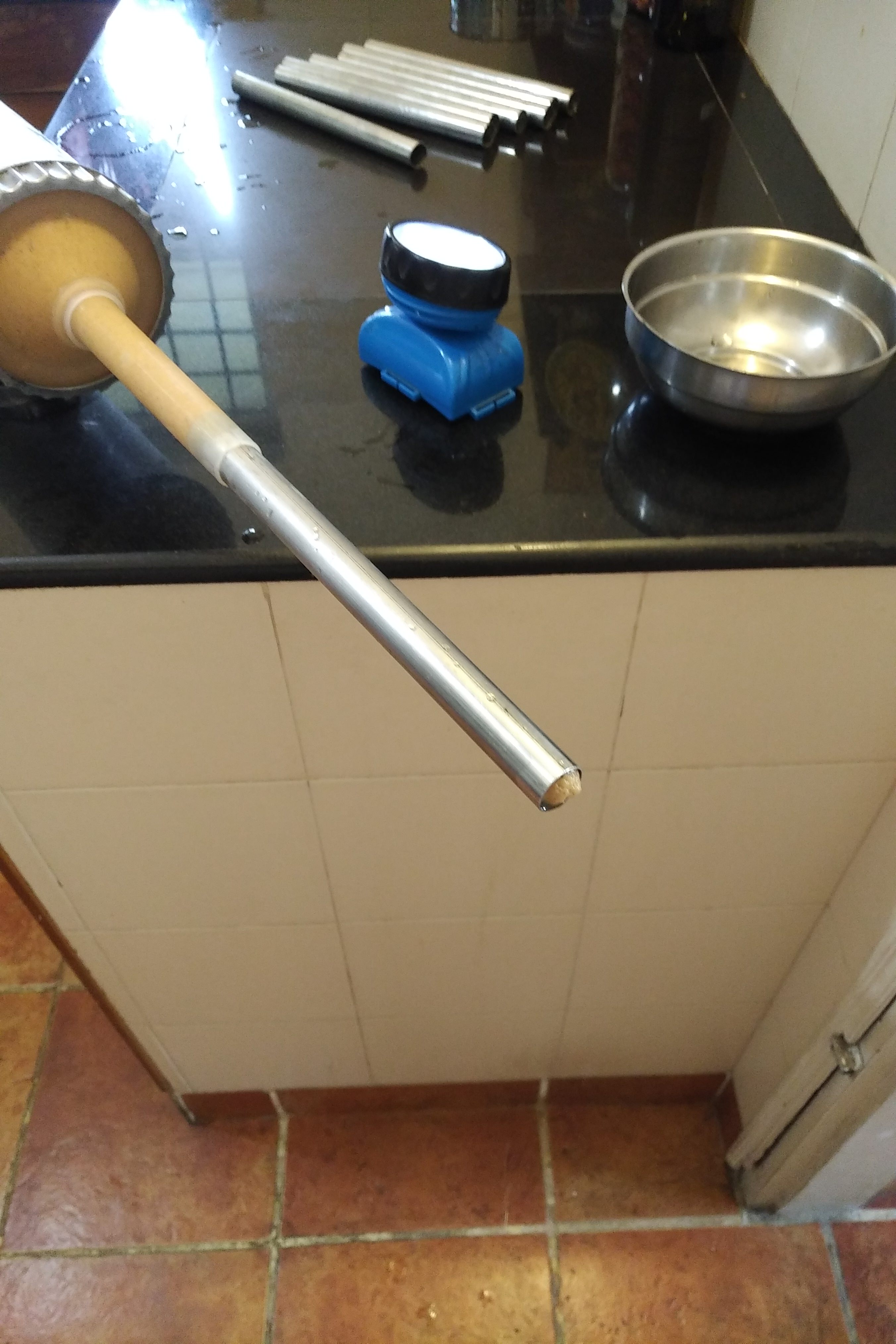 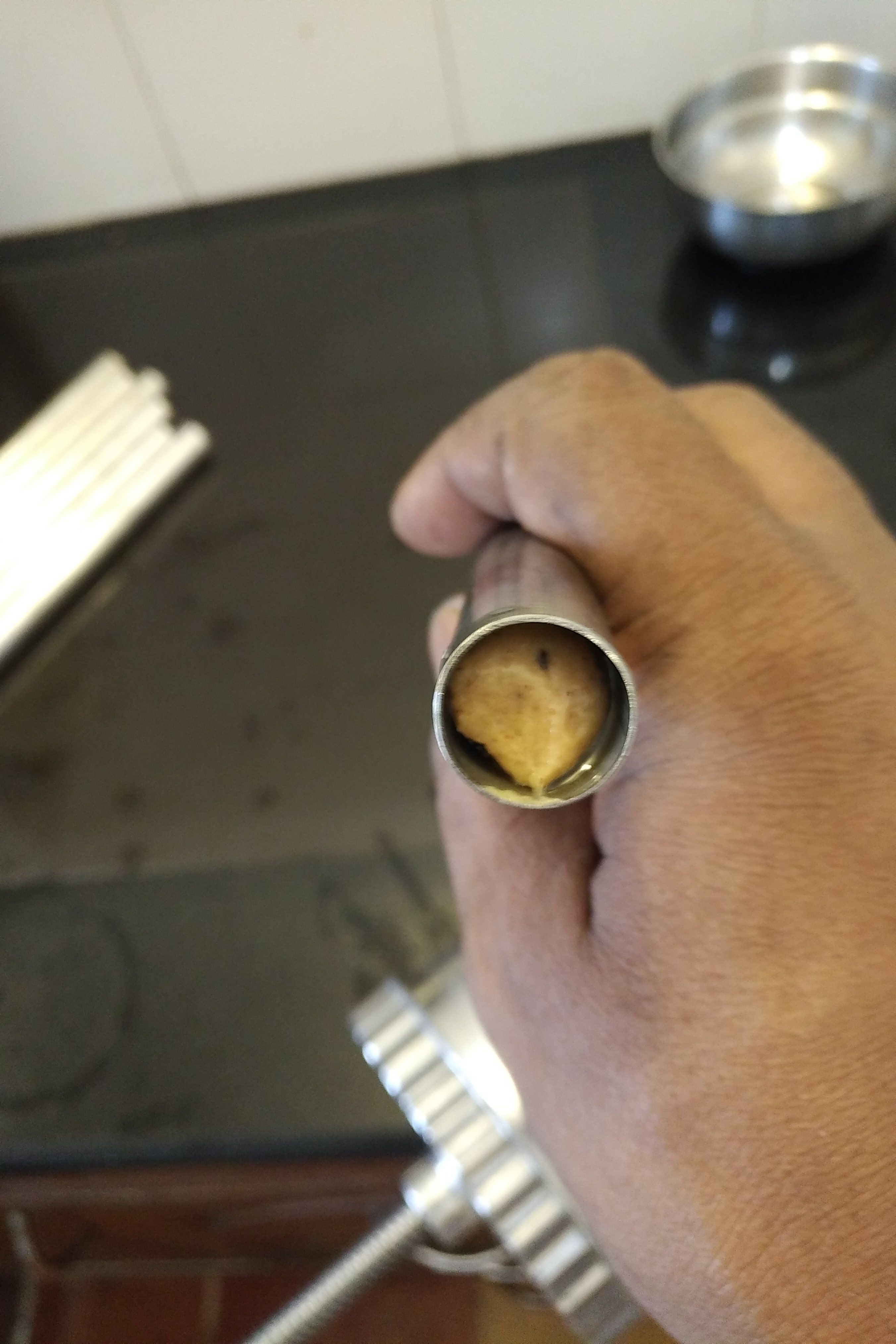 Ready to go into the oven 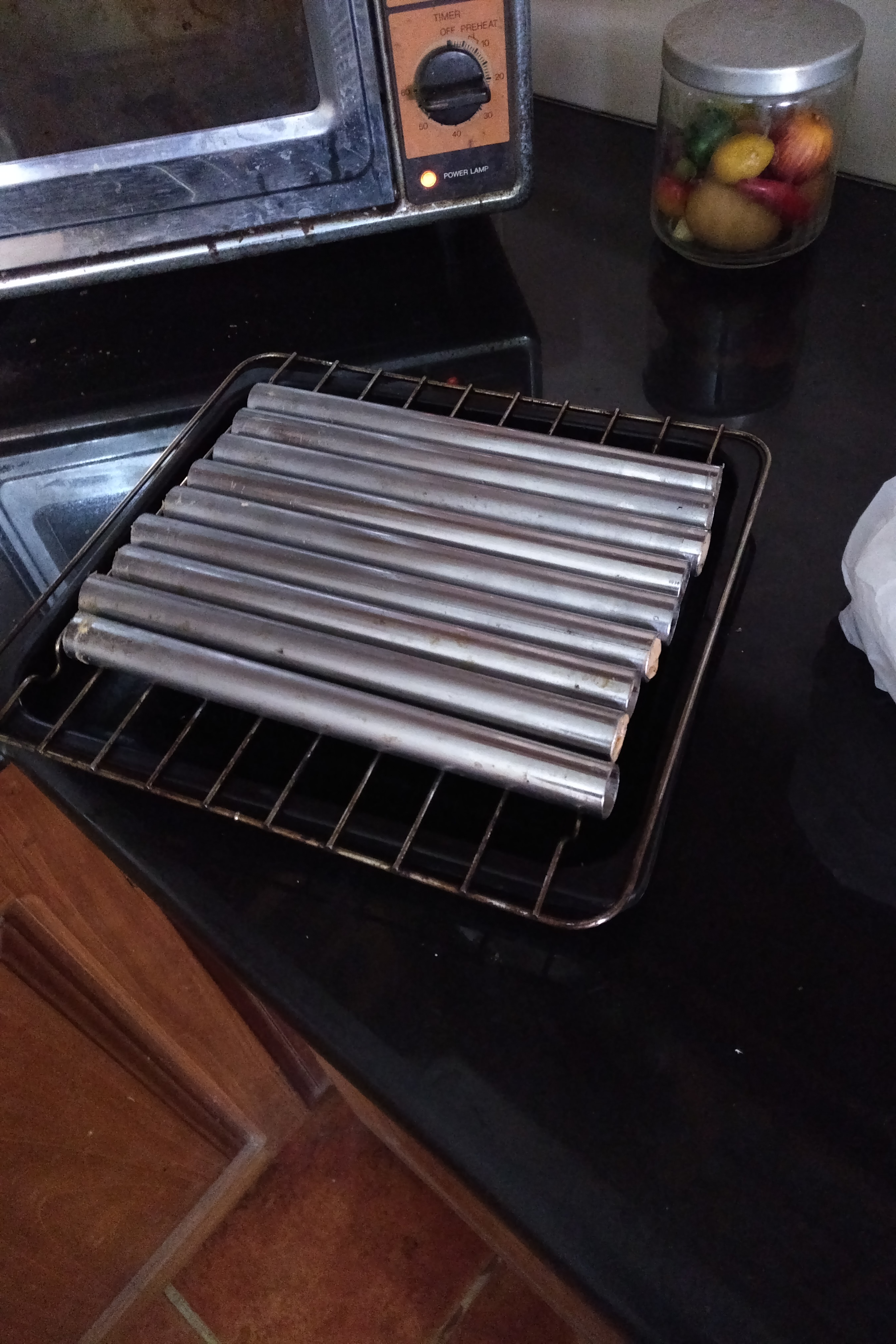 First attempt results. Not too bad, perfect cylinders. I need to do something about the air bubbles. The first batch stuck a bit to the tubes. 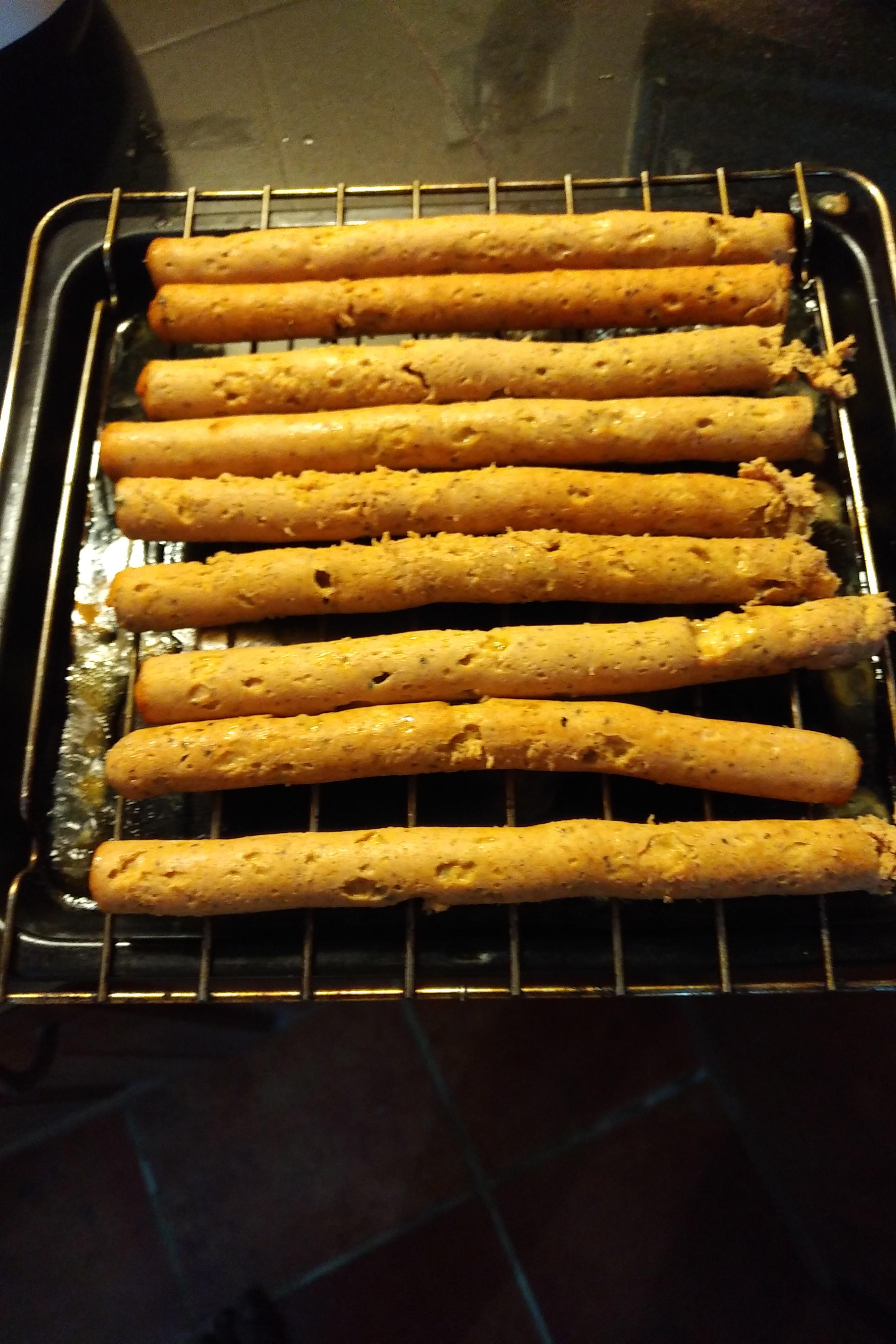 by Bob K
Well some air bubbles are inevitable (unless you have a vacuum stuffer). Those do seem excesive
is there an air release valve on your stuffer?
by joe_indi

Bob K wrote:.....is there an air release valve on your stuffer?

No, there is no air release valve.
Mine is a very basic stuffer courtesy of aliexpress.
I was thinking of installing a ARV myself. I do have an idea to try out.

That could be my fault. The contents was still coming out though I had stopped turning the handle. So I turned it in reverse to create a vacuum. Maybe some air got sucked in through the rear of the piston (just a plate) which does have a gap.
by Butterbean
That's a pretty neat idea.
by redzed
Interesting idea to make skinless sausages, but at the same time a heck of a lot of work. Why not just use a cellulose casing, the type that is used on North American hot dogs and other emulsified sausages? They peel in a flash and make an attractive looking product.
by joe_indi
I have not given up on this folks.
I think I have found the reason for those air pockets.
I was using 3/4" steel tubes that were pushed into the nozzle, which does not leave space for the air to escape.
After consuming a lot of sausages in the process I realized the ideal air release would be the steel tube itself. That is bigger tubing.
So I tried using 1" tubing that is loose on the nozzle and allowed the air to escape through the sides, and Voila! Success!
Additionally, refrigerating the tubes a bit causes the meat to shrink enough to free itself from the tubing.
Why I like this skinless sausage is that the process is fast and less 'wet' than casings.
Here is a picture of my first attempt with the 1" tube and my best attempt with the same meat, with the 3/4" tubing.
A lot better don't you think?
BTW I have now realized what I got to do for better results with the 3/" tubes, use a smaller nozzle that will go into the tubing by redzed
Well Joe, it's great to see a guy that just does not give up! It certainly does look a bit better but I would still go with cellulose casings, they peel off like a breeze, look perfect and save time. And how about adding a scant amount on nitrite to give the sausage a bit of a pink colour?
by joe_indi
redzed,
I used 2.5gms of Cure #1 per kg of meat. Maybe a couple decimal on the higher side (2.

.
Maybe the pinkness could be because these were still moist just out of their (steel) casings after about 30 minutes of steam at 70C.

Yes, using cellulose or collagen casings would be the easier way out, but I really want to get this alternative working for me.

Joe
by Bob K
This deflatulator posted by Idakraut should give you more ideas http://www.wedlinydomowe.pl/en/viewtopic.php?t=6674
All times are UTC+01:00
Page 1 of 1
Powered by phpBB® Forum Software © phpBB Limited
https://www.phpbb.com/