Almost everyone does it a bit different.
'Summer Room' temperature 85 degrees and 60-65% relative humidity here.
Cured 2 days per pound.
Top

OK great thank you, I had planned on the 2 day per pound so I'm on track with that. Not sure how I am going to handle the "Summer Room' temperature 85 degrees and 60-65% relative humidity" but I will think of something. I don't want to tie up my curing chamber for this so I just might have to come up with another plan. I still have plenty of time to sort this out.
Top

I agree with Diggindeep. No right or wrong answer but what you choose will be reflected in the overall character of the ham. Some like it more salty than others. The Kentucky hams I've tasted - and these were high dollar items - were extremely salty to my taste but that is how they like them. I've done it this way but my preference is a less salty ham so I backed my last ones off some and this was good to my taste.

One thing I think is important, and this is just my thoughts, but I prefer to let them equalize longer than the two weeks which is mostly recommended. I'll rinse them then let them equalize maybe three weeks. It just seems this works better for me and after all its not like another week will matter in the scope of things.

Your summer sweats is up to you. I don't worry with the humidity. I've hung them in the attic like many in Virginia do. Hotter the summer the better the ham. My attic will be in the 80's in the summer months. This heat tends to put a nutty taste to the ham. Some like this some don't. Some use this nuttiness as a gauge of how good the ham is. Some don't.

I think in all, its really what you want and like. I'd suggest doing one ham on one extreme and doing another on the other extreme and seeing the difference in the end product. Personally, for eating purposes, I like them less salty, and younger. No more than a year old but in small doses and/or for seasoning, you can't beat one that has been aged some years with some hot summers to really set some interesting flavors.

I guess, what I'm saying is there is no right or wrong way to do it but the longer it ages the more intense the flavor but the harder it is to slice. Just my take on hams.
Top

So I know one of the main differences between one of these country hams and procsuitto is spicing and that the country ham is smoked (right?). But other than this, are there any other differences? Like different methods of curing or drying? Different suggested temps or RH?
Top

Steve Schroeder wrote: Of course. Hundred of thousands if not millions of American country-style hams are produced by smokehouses in the US every year using the exact same meat available in your market. The cut is usually called a green or fresh ham. Some smokehouses use skin-off hams because they cure. equalize, and dry faster and more uniformly - typically about nine months. I prefer skin on hams - these are usually called rough-cut hams, and might need more trimming, because they dry a little more slowly and look cool. The university of Kentucky video is excellent. I have about 300lbs of hams - some skin-on some skin-off in the cooler in equalization right now. We use both salt and curing salt on our hams because it creates and additional hurdle for some pathogens and helps keep the meat red. They are being held at about 40F right now, but I'll raise the temp in the cold room to about 50F/75%RH to imitate the increase in outdoor ambient temperature. By June they will be hanging in the smokehouse under ambient conditions.
Really, any whole muscle cut of pork can be cured and air-dried this way to excellent effect, including the butt or shoulder you buy at Sam's Club. Some decry "commercial pork", but it's what we've got. I wish it were fatter, but it's what is available. There may be some advantage to using some kind of heritage animal, but my own view is that this is a mostly romantic notion, held mostly by people who've paid the outrageous price for hand-grown pig. Let's don't let the perfect be the enemy of the good. I paid $1.44/lb for rough-cut ham (wholesale, case lot) from a packer that supplies smokehouses all over Missouri, Tennessee, and Kentucky.

Steve, you have hit the nail on the head. Organically raised free range, heritage pork would be fine, but it's not only expensive but often difficult or impossible to source. Where I live there are a couple of producers. Last summer when I contacted one, I was told I could order one, around 200-220 dressed weight with head and leaf lard. At $4 per pound, once you do the math, it's a serious chunk of change and then I would have to process and eat all that pork. So like the masses, I have to be content with market hogs. Until recently one supermarket chain would have wole legs on sale a couple of times a year for 99cents per lb.

It's interesting that you do large volume country ham curing, therefore a couple of questions. You inject the vein or just dry cure? What is your failure rate (if any)? Reason for asking that last question is That I just recently read in a techical manual that in Italy, in the 1970's, approximately 25% of the hams did not get the stamp with the Crown designating it as Prosciutto di Parma, because they were spoiled. I know that they cure with sea salt only, but with centuries of practice, I was surprised at such a high number.
Last edited by redzed on Wed Feb 04, 2015 15:18, edited 1 time in total.
Top

rgauthier20420 wrote:So I know one of the main differences between one of these country hams and procsuitto is spicing and that the country ham is smoked (right?). But other than this, are there any other differences? Like different methods of curing or drying? Different suggested temps or RH?

I think a "certified prosciutto" has to adhere to a strict set of rules and ingredients but a country ham not so. A country ham can use anything at your disposal but the basic curing technique is essentially the same. Some might split hairs but I think in general this is true.

I have an Italian friend who is in the food industry and I sent him a sample of my prosciutto - or rather my prosciutto-like country ham since real prosciutto can only be made outside the USA. He is not one to stroke egos and can be painfully honest at times but he said it was some of the best prosciutto he'd ever tasted. He sells prosciutto and other meats for a living so what I take from this is the difference between this ham and other hams I'd made was the it was less salty, more of a silky creamy texture than other country hams I'd made. This was accomplished by less days in the salt and possibly a shorter aging time.
Top

redzed wrote:At $4 per pound, once you do the math, it's a serious chunk of change and then I would have to process and eat all that pork.

And when doing the math you need to remember that you are paying $4/lb for any waste. When I included the waste my price last Fall was $5.50/lb - my last pork side

So now its time to remove the ham and clean up the ham. It has lost 21% over the curing stage. 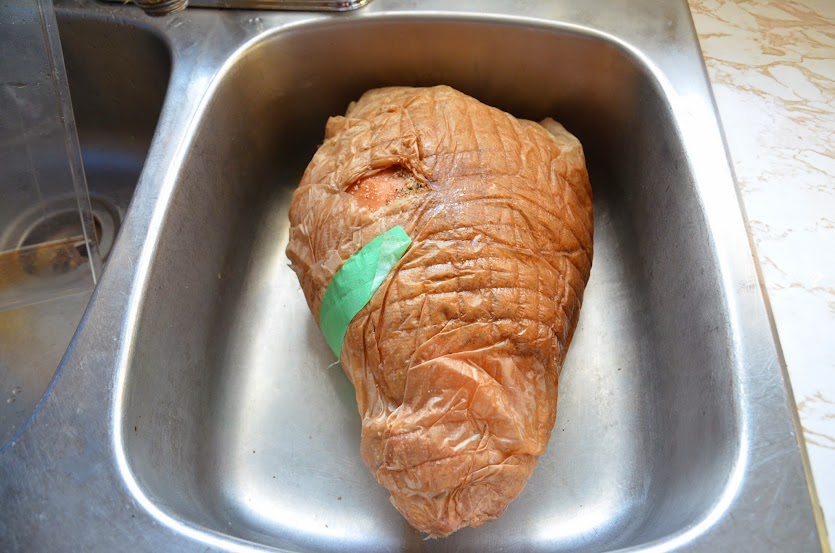 Still a lot of salt on the skin sides 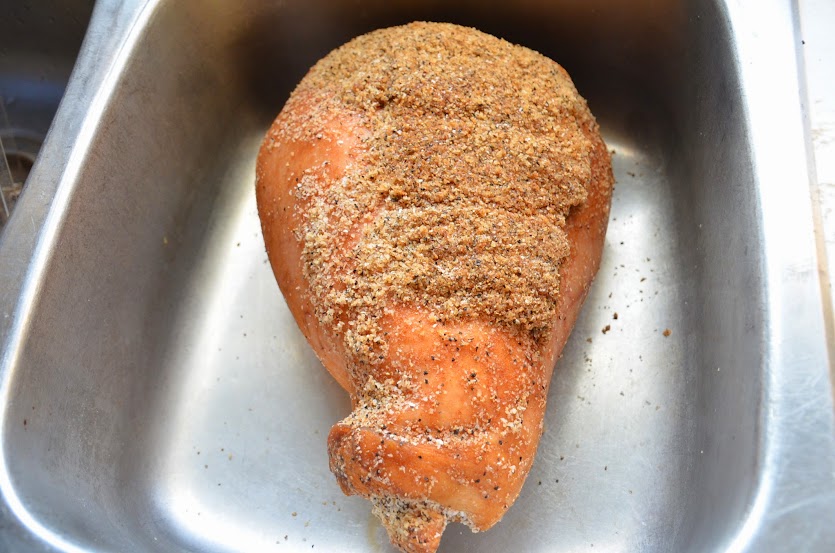 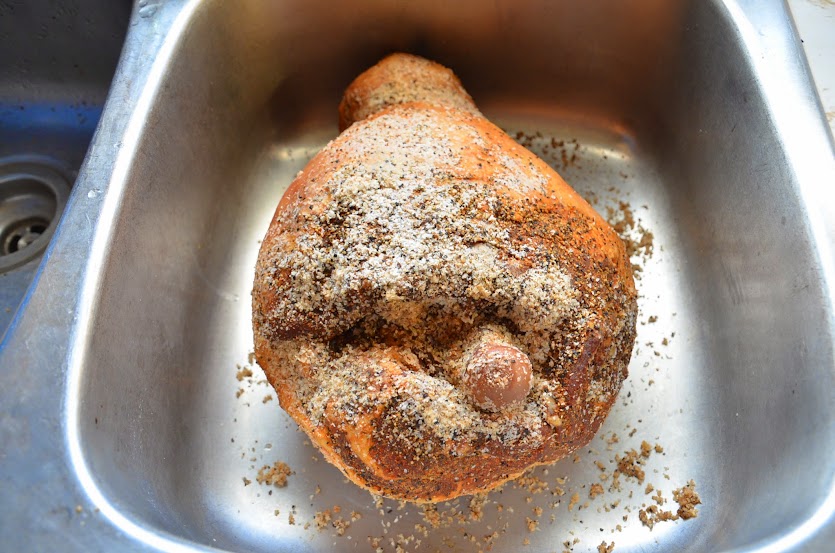 All nice and cleaned up, love the color of the meat 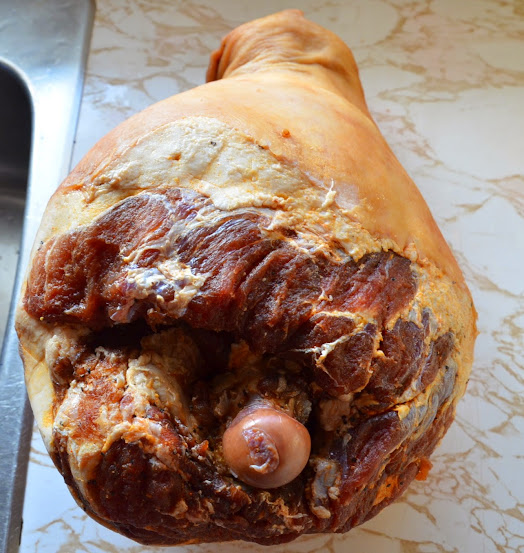 Off into a bucket of cold water and into the fridge for 24 hours to help remove some salt. 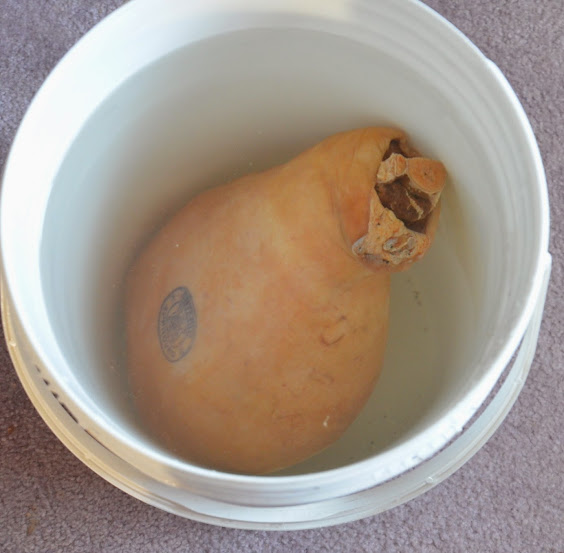 Cure Equalization
After cure removal by washing, the cured product
should be stored in a 40°;F environment for
approximately 14-21 days to permit the cure adjuncts to be
distributed evenly throughout the ham.
So after that it will get a 24 hour cold smoke and then hanged at 50-60°;F till next Christmas. Wish me luck, so far things have been going good but that can all change real fast
Top

Devo it really does look great. I wish I had a pork leg like that to play with! I do however, have a piece of leg in the freezer part of which will go into making a Kindziuk, and from the rest I will make a fiocco, a poor cousin of the culatello.

Well I spoke to soon! A local supermarket has whole pork legs on sale this week for .99lb! There is a limit of one per customer, so I will have to take three friends along and buy four! Will try my first dry cured prosciutto or culatello style. Now I have something to get excited about! Even though the meat is not from a heritage breed, and probably not fat enough it will be fun to experiment!

Devo
Did you end up using nitrites/nitrates or salt only?

Wow Chris thats a good deal..cheaper than shoulder!!
I hate those one to a customer deals....but they serve the purpose for the markets.
Top

Yes I ended up using nitrite/nitrate at the rate of 1 level teaspoon per 5 pounds of ham so I would have some piece of mind.
Top

redzed wrote:Will try my first dry cured prosciutto or culatello style. Now I have something to get excited about! Even though the meat is not from a heritage breed, and probably not fat enough it will be fun to experiment!

I agree on this, had to do three sides of pork up for the Spanish night at the Club this week .. only things (except for a bit of trim) left was three legs which I am turning into (again, fingers crossed) prosciutto. Off the legs I do for hams each week normally I have the nuggets left over and have just started putting them down for fiocco di culatello 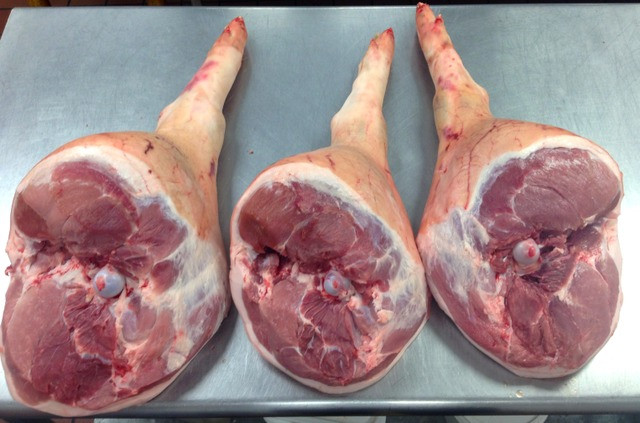 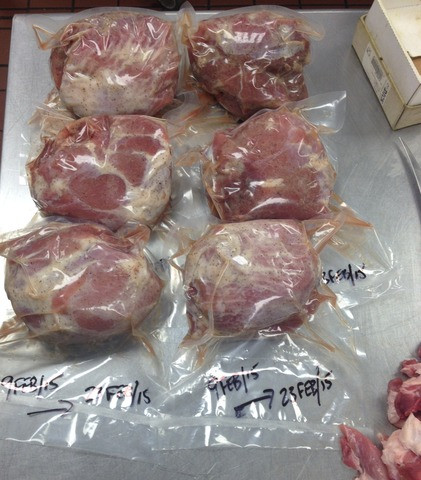 Getting back on topic
I was going to smoke it on Thursday but I am going to need my sausage smoker Thursday or Friday so I started giving it the first layer of smoke. Should be good for about 10 hours and the PID is set for 50 degrees so it will not freeze over night. Tomorrow it will get another 10 hours of smoke. Than I can hang it in the basement and forget about it till next Christmas. 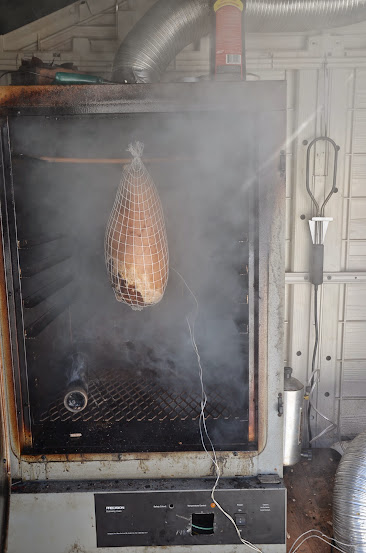 So no time in your curing chamber? The humidity in your basement now is probably on the low side but will increase when the furnace is no longer running. What will be the temp and RH in your basement in the spring and summer?

The reason I ask is that I was going prepare one of the four legs I bought a few weeks ago, in a similar way but then chickened out. Now I have two culatellos ready for my curing changer, and am am running out of room. Guess it's time to get a bigger one.
Top
Post Reply
54 posts